This is an archive of a consumer complaint published against ACP Accounting PLL at DirtyScam.com-

Jamie (at ACP Accounting PLL) did both mine and my sons tax returns last year and after charging us for both returns which were immediately paid before they would send in the return (of course)  a week later my son received a 1099 in mid-February.They had to file an amended return for him and charged another $75 for the amended return which I thought was a bit excessive since everything was computerized and all they had to do was insert the new 1099.This was all done by email. This year we decided to go in person and meet Jamie (who is very nice) and Geoffrey Caldwell (who is NOT so nice).The reason was we had solar panels installed and we discovered that neither Jamie nor Mr. Caldwell did NOT know or had ever filed a return for the tax credit on solar panels.In addition, I was informed that I did not have to file tax returns even though I collected Social Security and received some monies from my pension account; that my son could use me as his deduction.We told them to hold off doing our taxes and not to do anything until we called the Solar company; unfortunately we left leaving all our work sheets, 1099s, etc. (This was on Friday afternoon).That was my fault  Im usually so OCD about documents but didnt think I needed to make copies before I left home.We did call them back the following Monday and Mr. Caldwell did NOT inform Jamie to stop working on the returns and she apparently had but wasnt told not to.When I called and asked them to mail back all our documents she was surprised. She later told me that Mr. Caldwell had failed to inform her not to do anything until after we called.Later in the week we received by mail my sons tax info but not any of my 1099s and none of the work sheets which I had spent well over 2+ hours filling out.In the meantime we contacted another CPA who was very familiar with solar installation filing and he was very informative AND in addition he informed me that my son could NOT put me on his return and that I HAD to file my own.I had 5 or 6 e-mails to Jamie asking for my 1099s (I was able to get them off the websites) but she informed me the worksheets were not there  then big surprise  she found some and emailed them to me.My opinion is after meeting Mr. Caldwell and learning of these two errors  I did not feel confident in his office doing our returns again.Mr. Caldwell was very abrupt when he walked into the conference room with us and made us feel very uncomfortable and we both felt that he seemed arrogant  this is not the type of person I feel instills confidence.Just my opinion and thought I would share it because thats why I went to them in the first place.But now I see that he had only two reviews and one was 5 years ago. I would not recommend this office at all 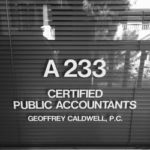