This is an archive of a consumer complaint published against Alaska Neurology Center at DirtyScam.com-

Alaska Neurology Center is by far the worst customer service I have ever experienced.I attempt to contact them FOR MONTHS regarding an incorrect bill. Ive left voicemails and never received a call back.Today, I called and reached the receptionist and asked her to direct me to a live person in billing. I was sent to voicemail.I called back multiple times and spoke to this same receptionist who continued to transfer me to voicemail and later hung up on me.After telling her I would be driving to the office if she hung up on me again, she transferred me to Amberlee, who stated she is the manager of the entire clinic.I expressed to her my frustration as this whole ordeal had now taken up over 45 minutes of my time.Instead of trying to solve the problem, she explained to me that I had been tying up the phone lines and justified the receptionists behavior for repeatedly transferring me to voicemail and hanging up on me.Which I responded that this whole thing could have been avoided if she had taken two minutes to communicate with me, let me know no billing specialists were available and recommend a good time to call back.Additionally, when Amberlee verified my contact information so someone could call me back, all three phone numbers in my file were WRONG! I will not be returning to this clinic. 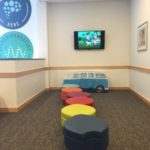