This is an archive of a consumer complaint published against Amazing Pet Expos at DirtyScam.com-

It is very disappointing to write about a company that did not do what was promised. While I am writing this, I have made sure to give Amazing Pet Expos several chances to make things right. I am not writing this in the heat of the moment but after a lot of thinking. The incident took place a was few months back. My group and I decided to present ourselves with APE and for that we paid $400 for a booth.However, we never got a chance to join the expo. The company APE rescheduled the event and we were never given any details of date change. When we called them to inform about the event when we saw no one coming, I was told that the date was moved few days later. The problem is, we already were locked for that date and were performing with another company.So, without making much allegations, I straight forward asked for a refund stating that I would not be able to attend the event on the changed date. Amazing Pet Expo is an unprofessional and cheat company. When they heard about the problem, they tried to give excuses which was not only lame but sounded unreasonable as well.I talked to the person in charge of the refunds and when we talked to her, she said that the person responsible for finance was stealing from the office and they were not in a position to pay anyone at that point. Although I did not buy their excuse, I had nothing left to say. After many followups, she proposed me to pay 50% right away and another 50% a month later. I agreed to the proposal.However, the money was not refunded. I waited and waited. I had to make several calls. After many months later, I received the $200 refund in December 2017. Since then, I have been waiting for the remaining amount. I think they would be refunding me another $200 after a year again or maybe they never will.This is a serious scam. When they asked for money, I paid it upfront and they did not bother telling us about the date change. If they would have informed us earlier, we would have never booked with another event in the first place. The problem of refund would have never occurred. But, it was their mistake that we lost our $400.They did refund us half of the amount after almost a year, but they still have our remaining balance. And, I am sure they are not willing to pay us back the remaining amount. I am never going to join their event in future. There are many people who have gone through the same experience with APE. So, I believe that it was not a mistake, but this is how they cheat people.Its been more than a year and whenever I call the refund manager, either she ignores my call or put me on hold for long so that I disconnect the call myself. These people are seriously making money by scamming others. Very unprofessional and unacceptable. 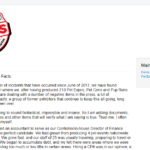