This is an archive of a consumer complaint published against Arrowhead Advance at DirtyScam.com-

I got an email stating that I was eligible for a pre-approved loan of $1000. I was anyway thinking of using some cash from last few months. When I checked the mail, I was too excited. I decided to use the cash for shopping and other paying bills.When I contacted Arrowhead advance who sent me the message for pre approved loan, I was asked to fill some forms. The forms asked for my security number, bank details and various other personal information. I did not think much and filled that form out. It took me six days to finally get a response.They asked me to fill few more forms and redo few formalities. They told that the loan could not be processed because of the mistakes in the form. I knew there werent any. However, I filled the forms again. They asked me to do the same thing for 6 times. After that, they stopped sending any mail. I did not receive any loan approval and no money was even credited to my account. They had linked themselves to my bank account to send the amount of approved loan.I had myself requested the bank to do so. However, after that, I stopped hearing from them. So, I called them regarding the procedure that was somehow stuck at certain point. These guys kept telling me to call back later as my application was still in process.After a month, when nothing happened, I asked for answers. I kept calling until one guy told me that the loan was denied. He said that pre approvals do not mean loan approval. So, I was taken aback. These guys did nothing but took all my personal information.I was scared and it seemed fishy. So, I changed my bank account and discontinued using the old account. Although that was still working, I did not keep any money in that account. The checking account was anyway within this companys radar. This I came to know when after a month, my bank manager informed me that Arrowhead advance tried to charge $179 from my account.The good news is that I was already prepared. So, I called the company to know what was going on and why I wasnt informed of such action. The guy told me that they were testing the account as the loan was to be credited in the account. And, he said that the amount was to added to the approved loan amount and sent back to my account.Do I look fool to them? If they were testing the account was working or not, they could have debited $1, why $179. Moreover, I was told that the loan was disapproved. And, I was not even informed of any such test before they tried to do so.All this clearly points to the scam the company is pulling. These people call for pre approved loans and never get back to you after taking your personal details. These people are frauds and nothing much. 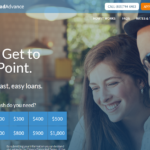