This is an archive of a consumer complaint published against Athletic Greens at DirtyScam.com-

I ordered Athletic Greens after looking at its review. I knew it was more than expensive as compared to similar products of other brands. However, I thought of giving it a try. I really wanted to know what makes it so expensive and what was the edge that it talks about, it has over its competitors.I know that most of these supplements ask for a rigid diet and exercise routine to enjoy its benefit to the fullest.It is also true that most of the work we need to do to get the desired result.Who will pay so much for the 10 percent of the task that these supplements do. In addition, they usually ask to double the dose.So, I ordered for one time and the product arrived on time. Having the supplement for few days, I understood that there was nothing different than the other companies.And, I decided to go for an another option the next time. However, they set me up for their subscription that I never approved.I got an email detailing my product and the shipping details. I called them to know the reason for that order and wanted to cancel it.It was really disgusting to see how these company make a fool out of you. I was furious and demanded a refund.But, they denied saying that the product was already shipped and they cannot do anything about it.I asked them to cancel the subscription going forward. I received the product and used it because I was made to pay for it. To be honest, there was no change.The product really sucked. And it was not totally organic as well. I read about it in details and there were questionable ingredients that were no far close to being organic.After double dosing, also nothing had changed. I was done with these supplements. Then again, the next month, I received the mail about the repetition of my product.Till that time, I was not charged and only the order was confirmed. So, I emailed them asking to cancel the order.At 2:00 AM, I received a message on my number for the deduction of the amount from Athletic Greens.It was outrageous. I mailed them hours before the amount was charged to cancel the order, still they did not. I called them in the morning and asked for the refund.They again tried to get me into the same circle. I was impatient. I asked them to refund.They told me that they would deduct half the price of the product and I will have to return the item to them bearing the shipping charges.This was the end of the conversation and I disconnected. I was too angry to tolerate it anymore. I thought of getting in touch with my bank.But somehow, I received a mail from them confirming the cancellation of subscription going ahead.They also refunded my money and the product never git delivered. I think my anger played the part.But it gets really irritating when companies try to take advantage of you.Athletic Greens is among those companies that sell shit folded in beautiful bottles. 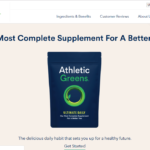