This is an archive of a consumer complaint published against Bay Equity  Augustus Bukowski at DirtyScam.com-

Let me start by saying that it greatly saddens me to write this review, yet I feel it is necessary that I share my experience.We knew there may be a bit of difficulty getting approved for a home loan due to the fact that I had recently finished college about 1.5 years ago and was currently the only one working since my wife and I just had a baby.We had talked to BECU and they told us we absolutely had to wait until that 2 year mark and then after that there wouldnt be any problem purchasing the family property that we were working towards buying.It was far within our budget considering my salary, but it was mandatory we waited until that 2 year mark. Since interest rates were at a historic low, I got the great idea to call a few small lending institutions to see if it was the same case as BECU.Augie was the first that I called and after explaining our situation, he insisted he “knew there wouldnt be any problems.We ended up going through his whole underwriting process before closing and everything looked great.He was incredibly helpful in the beginning and answered all of our questions and hosted a big meeting to start the beginning paperwork with us as a family.We felt in over our heads and he helped bring clarity.Then everything took a nose dive. Augie left on his honeymoon without letting us know, finishing a crucial piece of paperwork needs to close, or getting his team up to date on it.Over a month later, I was finally able to get him to respond to an email. My real estate agent had been tirelessly calling and emailing, along with myself.He never apologized and said he was filing up the last piece of paperwork and said we were days away from closing.Then the next 7 weeks consisted 8-15 days on end of not being able to get him to pick up his phone to let us know what process we were in. Just incredibly unprofessional.He finally ended up telling us that we were having problems due to my lack of two years in the job the thing I told him the very first 10 minutes on the phone.He then told us that he found a new way and was writing up the paperwork. I then couldnt then get ahold of him for 2 weeks when i finally told him that we would be going elsewhere to finish our loan.There really are too many details to include. I really liked Augie as a person but he continued to show me that he was lying and stringing us along with the loan and communicating in any way wasnt important to him.I wasnt pestering him I dont expect a lot. But when he wont respond for over two weeks when you know hes in the office, it makes you wonder.If he just would have been honest about it being too tricky to close until the 2 year mark, we would have stuck around because we did like him.And it would have been a hell of a lot easier for us. Just dont sit there in front of my whole family telling us that this will be a maximum of 2 week closing because its such an easy family deal and then work us like this.He never once apologized and made it very apparent he couldnt care less when we were leaving and frustrated. A little apology would go a long way.I would not recommend Augie to anyone. You need a LO to give you bi-weekly-ish updates. What a terrible first home buying experience. Thankfully it is a family deal and it wont be sold out from under us. 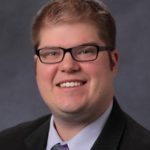