This is an archive of a consumer complaint published against Beau Crabill Reviews at DirtyScam.com-

I was very much interested to learn about the strategies for selling branded items on Amazon. Being a seller on Amazon, I have been able to make quite some profit. However, not able to start selling big brands limited my profits to a huge difference. Hence, I decided to learn what Beau Crabill does when it comes to selling huge brands. I had heard a lot about this course and was interested to know even further.After starting the course, I made sure to keep track of everything that I do and complete my assignments as asked to. I did this to ensure that the refund policy could be satisfied by me in case the course did not help me at all. After all, it costed $997 which is a huge amount.I have come across many such courses online, but most of them teaches what I already knew. That was the reason I opted for an expensive one thinking that it would have something more to offer. However, this was not the case. Beau has no knowledge about anything that could help an already existing seller. He may be able to help those starting to sell through Amazon, but someone like me who already knew everything that is called basics of selling on Amazon wasnt helpful at all.I was shocked to know that the course was a flop show. I had spent so much that I really needed to continue taking that shit for one month. This is because the refund policy said so. I got to know in the first few classes itself that the course was bogus and no where deserved a price tag of $997.I kept doing everything that was asked. The assignments, the purchases, whatever the course demanded, I did it. I have proof for everything that I did. After a month, I literally did not get any lead and the entire system that is created by Beau Crabill, failed me finally.The course is baseless. You may never be able to understand what this guy has tried to put across. We already know most of it who are already working for the same niche. I mean, come on, around $1000 for something that I already knew. I was at least sure that I would get the money back. However, that myth also was broken into pieces when I requested for it.It was after a month, I put an email across stating that the course wasnt helpful and I would like a refund for the same. I did not get a reply for that mail. I again forwarded the email seeking an answer. This time also there was no reply from the other end.So, I did it for the third time. This time, they did reply me asking me to wait for a week before they checked all the details. They asked me to submit every possible proof that I had. I did as they asked. I had already included everything and checked that again. I again uploaded few more documents that I felt could be helpful and submitted it to them.They did not reply for the next one week. It was already more than one and a half months of requesting the refund. When they did not reply to my mail, I again emailed them asking for an update. The system is so lazy. I am not sure how this guy manages things. He keeps customers waiting like this. If I was the only case, I feel so cheated.Anyway, I got a reply after few days. The email said that I was not able to fulfil the clauses of refund policy. And, I would not be able to receive a refund. There was no explanation about the problem that occurred. I was so frustrated. I again emailed them asking for the reasons. They mentioned that the course wasnt completed properly. This was a lie. They also said that the refund request was sent very late. However, this was not true.It was these people who responded late. According to them, the first email never reached them. They also said that I had not submitted the documents properly. They lied about everything. I know that there were proper steps taken and abiding everything that the refund policy says.I was able to connect with Beau Crabill somehow. I talked to him about the problem and he said that it was my fault that the course failed. He started flaunting about how his course has helped many. He also added that there is no way I would be able to get the refund back. He quoted that it is rare that anyone gets the refund.I was shocked to hear what he had to say. He said that instead of worrying about my money, I must seek knowledge. So, what he provided was shit. This is what he meant. Whatever, he did give few minutes of his precious time that he enjoys fooling others. And, I understand it now. This guy is another one of those internet gurus, who show their fulfilled life only to bait customers for paying for their services or products.The course was a complete scam. There was nothing that can be learned. He has just tried to put things here and there and elaborate on unnecessary topics. I feel cheated. This guy is a scammer and con artist. His Amazon FBA course is bullshit. Do not ever pay for his courses or you would end up feeling scammed as I do. 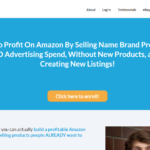