This is an archive of a consumer complaint published against Benjamin & Young LLP at DirtyScam.com-

Trying to work with “Partner Ruben Collasso at Benjamin & Young has been a horrible, frustrating and unnecessarily time-consuming endeavor over the last 2 years and for that I would give them ZERO stars if possible.Our previous tax preparers firm was acquired by B&Y and we were told that Ruben Collasso would be preparing our taxes.It really is a long story thats been unfolding over the last 2 years, but in summary, Mr. Collasso was unprofessional, unresponsive and made errors on our 2014 income tax return.When we first met Mr. Collasso in 2014, he offered to assist us with a few questions about our newly incorporated business after the end of tax season.When I followed up with him about this (this was before we learned he had made errors on the 2014 return), he never responded to my calls, emails or text messages.I realize that perhaps Mr. Collasso was not able/ did not want to help us with the corporation questions, but common professional courtesy would dictate that he could have simply informed us of this — Sorry, cant help you. Ok, fine. Done.We would have just looked for someone else to help us.We thought we wouldnt have to deal with Mr. Collasso any further, but unfortunately when we went to a different tax preparer for our taxes we were alerted that there were several significant errors on the tax returns.It turned out we owed a significant amount of money for 2014 and his errors also caused our estimated tax payments to be insufficient meaning we also owed a large amount of money for 2015.The effort I made to get Mr. Collasso to acknowledge the errors and amend the returns, let alone respond to phone calls, emails and even faxes was ridiculous.And never once did he apologize for the inconvenience that he caused.His assistants were only slightly more helpful but they didnt acknowledge the inconvenience either.In addition to the time spent trying to communicate with Mr. Collasso, I also had to spend a lot of time interfacing with the IRS and the CA State Franchise Tax Board to make payments on taxes owed plus penalties and interest.Lastly, it took about 2 months to get a check from B&Y reimbursing me for the penalties and interest I had to pay due to the errors on the return.I would NEVER recommend Mr. Collasso to anyone and really question if anyone else at B&Y is much better if this is how their “Partner treats his clients Beware! 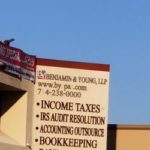