This is an archive of a consumer complaint published against Benton Nissan of Hoover at DirtyScam.com-

Mr. Carl Rawls is a nice car salesman from Benton Nissan of Hoover. Hes very personable and his rapport is awesome with his customers. He seems to try and help you the best way he can while still being honest. I appreciate the time you tookMy sales expectations started off normal with Mr. Carl Rawls he sold me my first Rogue so of course I went back to him to upgrade it.The Rogue I signed for hadnt been PDIed so I was told to come pick it up the next day by 1pm.Get a call on 2.10 saying that they had a lot of guys out sick and that they found me another Rogue exactly like my original one and I needed to come in and resign paper work.Everything went bad when I asked a question regarding why the payments changed on the paper I signed last night versus the paper I signed the next morning the price was $40 cheaper on the replacement car.The finance guy Jason acted clueless and said that he didnt want to redo all this paperwork just because Carl didnt want to go to Bessemer to get my car after I had already been told it was in the back being PDIed.Mr. Rawls wasnt sure why it changed either so I asked for a manager and after he was requested 4 times he came and tried to speak with us in a sitting area with other customers present so I asked to go in an office so I could discuss my business privately.This is where I wanted to leave and forget my car. The manager Jeff came into the office in a very condescending manner.He spoke to us as if were stupid saying the difference was the Benton benefits were added to one and not the other. Its not that difficult to understand.$1895 Plus tax doesnt equate to a $40 increase in the car payments for 63 months but thats all he kept saying and told us if we didnt want it take it off.If were feeling like were being lied too then dont buy the car and thats it but they wouldnt lie Plus our salesman is a pastor and he turns right around and said to us directly “Carl (the pastor) doesnt have any idea what hes doingHe kept on and on and wouldnt let me speak at all after I asked twice can you let me speak and then left the room after I said I no longer wanted to talk to him. He then goes and tell the salesman who is a pastor that we called him a liar.Carl came in very confused and I had to explain to this man what these other 2 men had said and done. It was awful.I literally sat there in tears and my fiancée almost made me leave without a car. The salesman doesnt handle the figures the finance office does.It was awful to see the finance guy and the manager throw the salesman under the bus because they didnt want to take the blame for their errors.I have never seen a company not operate as a team nor have I seen managers treat customers like this.He made sure to mention that he was part of new management.Well that new management destroyed my car buying experience and I will NEVER return here not even for services to my vehicle.Mr. Carl Rawls services he provided is not reflective in this survey just the Manager Jeff and Jason in finance.And at the end of it all I bought a car from a company that I dont trust now and still dont know why the price was truly different. 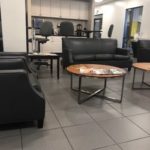