This is an archive of a consumer complaint published against Bloomex at DirtyScam.com-

I wanted to send something to my lawyer as a token of appreciation as he helped me to win my case which was pending from a long time. I searched for few options on the internet and then decided to send him through the online portal: bloomex.ca. I was quite satisfied after doing so. However, the next day, when I called him to confirm if he received the online delivery or not, he refused.I was waiting for him to call and confirm that he has received the flowers and chocolates that I ordered for him. However, when after a day, I did not hear from him, I decided to call him and confirm. He said that he did not receive anything from anyone.I got worried and tried to reach these people. Firstly, I called their number, but whenever I tried to select anything other than sales, my call couldnt connect through. This was suspicious. I tried a few times and then understood that I was never going to get anyone through their phone number.To give it a try, I selected the sales option and I was connected. So, I asked the guy about the order. He said that he would not be able to assist with the old orders and he would connect me to the concerned department. I was expecting that. So, I waited for him to connect me to someone responsible for catering to the delivery issue requests.What I realized later was that, I was on the previous menu where it asks for selecting from the different options. So, he got me to where I started at the first place. So, I tried to connect with someone on the chat. They are always online as they say but are of no use.I told them about the problem and they suddenly became silent. I even asked about the companys address and the names of the owners, but no one replied. I tried connecting with other on the chat and had the same problem. I did connect with another person, but was left in between of the chat when I asked for the problems resolution.I have that chat recorded through the printscreen. I later searched for the company on the internet and found disturbing comments about them. The company is a scam. I found same stories listed from many customers. They have very bad reviews on the internet and they never deliver the items.I wish I could have seen these feedbacks earlier. But, now was not the time to crib about it. So, I decided to put my complaint on the internet for other to know what they are getting themselves into. The orders may be of small amount or big ones, when someone pays for it, it means a lot to them.How it feels to wish someone belated birthdays or anniversaries? If the order is delayed, many heart breaks. And, in this case, the order was never delivered. Think about the agony I went through knowing that I was fooled. Stay away from this company. 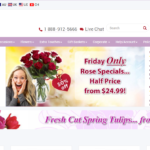