This is an archive of a consumer complaint published against Blue Bear Tax Solutions at DirtyScam.com-

Read all the way to the bottom for an outrageous surprise. This preparer is grossly incompetent, childish, and has demonstrated his incompetence on multiple returns.I didnt catch the first mistake until 2 years later, wherein he failed to carry over capital loss/gain.Its a simple calculation: take the prior years reported loss, subtract $3K, and that becomes the new carryover number.In addition, he failed to recongize contributions to a HSA as a deduction, and, in addition, calculated withdrawals from the HSA as a premature withdrawal, to be both taxed (again) and subject to a penalty.These mistakes were perpetuated and repeated on three years returns.When these errors were pointed out, he intially tried to argue with us, and couldnt comprehend the notion that HSAs were created to provide a pretax savings benefit from which qualified medical expenses could be paid.He insisted that his “software automatically calculates these figures, and that we made too much to qualify for a HSA deduction.Under his belief, you would take after-tax money, put it into an HSA, and then withdraw it for purposes of medical expenses only to be taxed a second time and also pay a penalty.If that were true, why not just put the money under your pillow or into an ordinary bank account?Ultimately, he was willing to correct the carryover error, but refused to fix the HSA deductions, claiming that our understsanding was wrong (even though we provided him with IRS circulars explaining how the HSAs work).Then, one Sunday (today), we got a text message from him telling us that, because he believes we wrote a negative Google review about him (that sounds very similar to our situation)We may as well rip up the amended returns, because he would not file them. We did not write the review, which was submitted by user “Chris Fortune.In the ensing text message war, he said that he would report us to the IRS for providing him with false information (first time this claim was raised, where he now claims that Scottrade losses that were incurred in tax years before he was retained are fraudulent)That he would report my husband, an attorney, to the bar association. He wrote, “Good luck proving your losses in an audit, and “Well see whats what, then. Well see who feels the pain the most.When we told him that we would write this review, he replied, “Im going to give you 24hurs to think about this during which I want you to reflect on who you might be dealing with!!!All of this because of a review written by another unhappy erstwhile client. 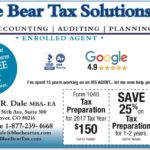