This is an archive of a consumer complaint published against Blue World Pools at DirtyScam.com-

This is the worst company you will ever come across. Think about promising a certain price and then adding additional cost to make it 233% extra, how would that feel. Either you tell exactly how much are you going to charge or else, do it for the price you claim. When I saw the advertisement on TV that said your personal pool for just $299*. I could not see the * sign which meant the maybe additional cost. I believe they should be writing guaranteed additional cost.I was scammed by these people after I signed their contract. Do not believe the great reviews as they must be posted by the company itself. These people are no good. The advertisement that sounded too good to be true is misleading and would lead you into huge debt.When I asked for the complete details on the price for the pool, I got a huge number. I could not believe how $299 turned into thousands of dollars. At first, they asked me to book the pool or I will lose the discounts currently running on the deal. So, I paid them $150 to book my pool. Later, I received a call telling me that I am required to pay extra that accounted for more than double the cost they promised, I was shocked. They said that the cost includes lawyers fee, building permit, and a $300,000 insurance on their name.I was shaken. They further added that the shipping cost is not included in that amount. That would be extra $395 if I wanted them to ship the pool. Or else, I will have to drive to Atlanta for getting it all by myself. This was very stupid. Why would you ask me to come and collect the shipment when you are taking so much money from me?I was not sure about the price they were requesting. Hence, I checked with local vendors and found that there was a huge difference in what they were asking and what the local vendors charge. After getting all angry and sweaty, I called them and cancelled the order. To this, they said that the money is not refundable.Moreover, during the order, they also did a credit check on me. This was to confirm the amount I would be able to pay. This is completely illegal. One cannot do that without my permission. And, without telling me so at least.When I called them to seek answers for all these questions, they hung up on me. The person told me if I am interested in the pool, I pay the remaining amount or I should forget about the advance. These guys are so much misleading that they never talked about the extra charges before asking for the advance. Once the advance was paid, they started pulling all the tantrums.I sometimes feel, they never actually wanted to do anything. They knew I would cancel the order after listening to the amount and they would be able to earn easy money without doing any work. Blue world pools are scammers. Stay Away! 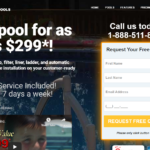