This is an archive of a consumer complaint published against Bond New York at DirtyScam.com-

Terrible experience working with Bond New York. I initially reached out to them to see one apartment that was listed on ReNt Hop in the UWS.She insisted at meeting at her office beforehand, which was not close to where the listing was.Upon getting to the office, I wasted 20 mins filling out forms about what I was looking for, even though we had already discussed this on the phone prior.The field agent that Krissy sent me out with was very nice but the whole process was extremely rushed.Krissy picked places to show me that did not meet my criteria and were out of my price range and were a complete waste of time to even look at.In the end, I never got to see the apartment that I initially contacted them about.I did find one apartment that I would have considered putting in an application for, but the manager Krissy Rincon was VERY pushy.I understand that NYC apartments go quickly and you need to act fast, but I wasnt given even 5 minutes to think and felt like I was being harassed, with multiple texts and phone calls to come back to the office and fill out an application ASAP.I finally made a decision on another apartment not through bond and was given attitude by the broker I worked with at bond when I told them I had found something else.Horrible experience and waste of an afternoon. If youre looking for an alternative, I highly recommend Anchor Associates. 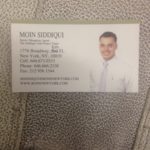