This is an archive of a consumer complaint published against Bright Lending at DirtyScam.com-

When I first reached out to the Bright lending office, I was greeted with great customer service. Everyone was eager to help. I wanted to borrow $500 and it was not a huge amount. I knew I would be able to pay the interest and principle amount in time. They told me that the interest is very nominal if I keep paying on time.They promised that I would feel nothing when paying the amount back. I made sure all the paper work was done immediately which they forced me to do right away because of on going offer. I did not get time to check the companys review and what other customers were saying about it.The loan was approved for 5 months with the set installations I had to pay every month. So, I made sure that the payments were made on time. In the 5th month, I paid my last installation with extra $100.I thought that the loan was completely paid. The next month, I did not do anything and in July, I received a reminder for paying the loan or facing the consequences. It was my final reminder and there was still $447 outstanding.When I checked the mail, I called the customer care directly and asked what has been going on. The guy had no clue. I wanted to ask about the amount that was paid to the principle amount and the amount paid for the interest. He said that he had no option to check that information. However, he could tell that the outstanding amount was $447.I asked if he could tell me the payments date when the instalments were made. He had no clue about that too. I tried to call the sales guy whom I talked to when visited the company. He was not answering my call.I visited bright lending right away. The guy was busy wooing other customers. Looking at me, he asked me to wait for 5 minutes and came back after two hours. I was still there. He said that my payments werent on time and that was the reason I was charged more money as late fee.I checked my payments that I had made through my bank account and every thing seemed in sync. To this, he said that I should talk to the bank as the payment never reached them. I called the customer service and they confirmed that the payments were made.I complaints other employees for the same problem and no one seemed to have a solution to this. I was promised a $100 interest over a $500 loan. However, they were charging me $100 that I already paid plus $447. This was even more than my principle amount.These guys are scammers. I have not paid the money and the case has gone to the collection team. I get calls every now and then and these people are disturbing me. The complaint is still open with bright lending and they are trying to sort things out, dont know how much more time they would take. 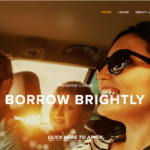