This is an archive of a consumer complaint published against Build Urban at DirtyScam.com-

Build Urban purchased a single-family home next door to us and are planning to develop it into apartments.We have no problem with density, and arent against development in the city. However, they have not been good neighbors.First, they trespassed on our property (opened a locked gate and walked into our backyard when we were not home) to survey their property line. They did the same to our neighbors.The lead, Edson Gallaudet, is unresponsive to our polite emails. Then, after the property was vacated, Build Urban has done no upkeep, and it is now an abandoned property in violation of city code (including overgrown vegetation, unsafe conditions, and lack of security).This negligence has permitted several people to break into the house, and created an unsafe environment. We have called the police and initiated code complaints.Mr. Gallaudet told us via email that someone would “swing by and check the doors, and has since been unresponsive.As neighbors to this property, we are not asking for much. We are not arguing against development, or using this company as a scapegoat fora gentrification debate.We are simply asking for them to keep our neighborhood safe, and communicate with those affected by their empty property, and they are failing. 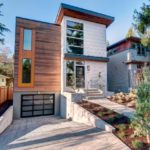