This is an archive of a consumer complaint published against Carefree Dental at DirtyScam.com-

I watched an ad saying that I can save more than $500 on my familys dental care every year if I chose a dental card from Carefree dental. I thought to check the deal and went to the website. It says by paying smallest monthly rental on their dental card, one can save a lot of money. The packages are for individuals as well as entire family.After I ordered the card, I realized that I was not able to take any benefit of it. We paid rentals for few months and then decided to cancel the card. One reason for cancelling the card was they charged my Visa card for more money that they said the card would cost every month.Also, there was no benefit from the card. This is just a personal feedback. We do not go that much to the dentist and we all have better dental health. Before deciding to cancel the card, I did try to ask them the reason for extra deduction from the card. To this, they did not say much. They did not refund the extra deduction they made.When I called them, they told me that the deductions are as per the plan. They asked me to send the transaction details from the bank. I called back and requested them to send me the details. It took a week for the bank to revert back. When I called this company after sending an email with the attached transaction details, the guy said that there has been no such problem reported from my end.I went through the entire conversation again. This guy told me to wait for some time before they could look through the details. I did as they asked. However, no one replied. Later, after three days, I called them back again and they had the same doubt. They did not know who talked to me.After thinking it through, my wife and I decided to cancel the card and decided to wait for the refund and to follow up from time to time. So, I called to cancel the card. After cancelling the card, we thought that there would not be any charges from my Visa card.It was around three months later that I realized that there were deductions from my card for every month since the time I cancelled my card. I called the Carefree dentals customer care to report the same. They said that it takes some time to cancel the card once the cancellation request is placed. This is insane.It was almost three months and they had not even been able to cancel a cards subscription. That sounded too idiotic to me. I asked to talk to a supervisor. The guy put me on hold for 45 minutes and never returned back. After 45 minutes the call got disconnected by itself. I called again and straight away asked for a supervisor.This time, they did connect me to someone who said that he was the supervisor. However, I really doubt he knew anything more than these support guys knew. He said that he would look into the matter and said that the card was cancelled right away. However, the fourth month, the deduction again happened.I called the support and they said that they had looked into the matter and would be able to refund one months fee. And, they said that there wont be any deductions going forward. I asked them what about the other refunds that I am eligible for. They said that they would be working on those too. But I do believe that they would just sleep on it. Anyway, cutting the long story short, the refund for one month was made after 15 days of deduction. Also, the card was finally cancelled. However, the refunds that were still remaining never hit my bank account.They did remember to call me and convince me to subscribe for the card again. I am never going to use this card ever again. This company is full of crap. They did not do anything to refund my money. I call them often to ask for the update on the refund and they keep transferring my call to other people and them finally disconnecting it.I have yet, not able to understand how they can accomplish such scam and still run their company. I checked the reviews online and saw many people posting about the same problem. Their cards being overcharged and some even claimed that they were put on subscription without owning a card.I believe that these people are not going to return my money. I have lost hundreds of dollars because of these guys. I keep calling them and they keep refusing my requests. My wife also calls whenever she is free and I do the same thing. These guys are scammers and fraudsters. They have made many clients repent their decision of buying the card. I now think, their advertisements said that we can save $500, but out of what amount.Since the time I subscribed for the card, I am being paying unnecessary fees. These guys have nerves to call me and ask me to pay them again for more months. After few months, I received a bill saying that the card was cancelled, however, I owe them $30. However, they were waving that amount as I did not use their service ever after subscribing it in the first place.Is this a way to threaten me that I could have been taken advantage of further? I do not know what to say, but these people must be charged for online fraud or whatever is the category their scam falls under. But, they must be charged. Or else, they would keep scamming people and taking away their money for no reason. 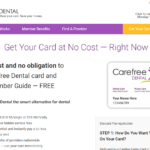