This is an archive of a consumer complaint published against Cellogica at DirtyScam.com-

I am an old woman and I do not shop online. However, I got a message that my credit card was charged for paying Cellogia for some beauty products. I enquired the same with my family and came to know that my 13 years old granddaughter had placed the order by mistake. She said that she tried to cancel the order but couldnt.So, I called the customer care from cancelling the order. They told me that the shipment was already in process and they could not cancel the order. They advised me to send back the shipment once the order is received paying the shipment cost and the money would then be refund. They also stated that the product must reach the company for processing the refund.Till this time, I understood that it was not their fault and as per the companys terms and condition, I will have to pay the shipping cost for return. However, after the product was received which took 12 days, I returned it as agreed.I emailed the company the tracking number and other details. After a week, when I called to enquire about the shipment, I was put through many call-directs and I did not get any answer. The online tracking showed that the product was received from their end. I kept calling them and nothing seemed sorting.I have other works to do. I kept forgetting about following up with them. Whenever I would call, they would give me another date. However, after the month, my credit card was again charged. When I called them, they said that I was on a subscription.I said that I had talked about it the first time and they never told anything about it. But the rep was not at all helpful. I even told him that the shipment I sent has not been acknowledged yet. Even after calling these people a hundred times, I never got a refund.I disputed the charge with my credit card company and was able to get my money back for the next shipment. I asked my bank to blacklist the payments through Cellogica. These guys tried to charge the account the next month as well. However, the bank did not allow the payment.I kept calling for few more weeks and the refund never got back. The other shipment that arrived, had few skin care products. So, my daughter used them. But she had rashes all over her face. We never used those products again. And, the refund was never made.I am sure this company has been scamming other people for their money. Their products are unsafe and they keep charging cards for no reason. If you have ordered from them once and do not want to be charged again, talk to your bank. Or else, you may not even know when they would take your money away.This company is a fraud company and must be blacklisted online. There are so many disgruntled customers enough to prove the same. 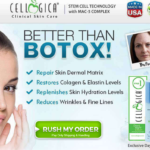