This is an archive of a consumer complaint published against Chartway Federal Credit Union at DirtyScam.com-

Chartway Federal Credit Union took over a credit union I had been using previously then started billing me for not using the account once switched over to them.I tried calling to close the account, they said since my account is “dormant it now has a negative balance with late charges and would need to be paid before they will close the account.Asked to pay with a card by phone, they said they cannot accept cards, but if I called in with a routing and account they can take a payment from a checking account and close it.I tried calling back with a checking account and now that I was actually able to get ahold of someone they said they require me to come in to a physical location ( which I havent been to ) to pay to close an account ( that I never opened with them ) and will continue to accrue late fees until I do so.They also dont know why I would think that I could by by phone.Open an account with America First or Mountain America.Chartway is impossible to deal with, rude, and seems like the left hand doesnt know what the right hand is doing. 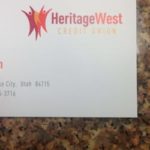