This is an archive of a consumer complaint published against Classic Country Land LLC Reviews at DirtyScam.com-

Scott Wigginton of Classic Country Land LLC has no shame and do not have empathy for those people, whom he robs. Scott Wigginton uses dishonest real estate practices to lure its customers and leave them to suffer. I am one of his victims and was fooled when I purchased a property at The Ranches of Montauk Park in Missouri. Scott lied about the community well at The Ranches of Montauk Park which he also included in the site maps represented on ebay as well as on his website.When people started moving in, they came to know about the lie and spoke to Scott. However, he assured saying that those were rumors and we should ignore them. After we all shifted, in total 7 families, we were stunned to know that Scott was the one who was lying and not the neighbors.We got hold of Scott Wigginton and he denied about the community well in the plan. He also changed the land Platte on the website without the community well. After the entire property was sold, he changed the lot numbers as well. Now our contracts have different lot numbers than the ones on the website.The fraud shook us completely and three of us went to the Dent Co. Tax Assessor office. Ladies working there were generous and showed empathy which we required but was not enough to heal our wounds. They told us that the property was never recorded, neither on Scoot Wiggintons name nor on his company, Classic Country Lands name.They were aware of the similar fraud happened in Houston, MO (Texas Co) on the name of Scott Wigginton and informed us about the same. They said that Scott Wigginton is a CROOK and we have made the biggest mistake.The lady from the Dent Co. Tax Assessor office also informed us that the land was never surveyed and issues regarding fences and boundaries will not be resolved if happens. This information was enough to motivate few neighbors to occupy the unfilled lands. And it soon happened. One of our neighbours, fenced off two more properties other than the one actually purchased.We even tried to consult every single surveyor in the area to do the needful but no one wanted to put their hands in the Scott Wiggintons property. Everyone was aware of his frauds, I am not sure how can we miss that information. Either we did not do our research on Scott Wigginton or he was too smart to get away with that.The problem with boundaries made the neighbors fight among themselves. When one started the invasion, others restricted and the war begun. The police had to get in and the sheriff called Classic Country Land and asked them to survey the land of The Ranches of Montauk Park in order to have the boundaries enforced. It was the right decision and everyone supported except few who were opportunity grabber.After the law started its pressure on Scott Wigginton, it made him furious and he started threatening to evict us from our own lands that we have leased for 15 years. I pay my monthly payments and have not done anything to break the lease. However, Scott Wigginton filed a lawsuit stating that my lease with them had broken their contract for deed.I had to hire a lawyer and its expensive to consult lawyers. But I had to be sure of my safety. The lawyer confirmed that the threatening is of no harm as the lease was valid. If someone had broken the law, then it was Scott Wigginton. He sold us the land that was never surveyed. I have seen scammers but the audacity that Scott Wigginton has made it obvious that he was not the new comer in that game.Every real estate company has to follow few guidelines to make it convenient for the land owners during their stay. But, Classic Country Land, LLC, owned by Scott Wigginton does not follow these guidelines. My complaint and many others combined, forced the Missouri Attorney Generals office, as well as the Missouri HUD office to investigate for the illegal land selling against Scott Wigginton. I have seen a lot and would not like the same happen to anyone else. Although, I am moving, I will be assisting the authorities in their investigation.I searched a lot about Scott Wiggniton and his other properties and found out similar issues. Hence, I have also convinced other land owners who are going through the same hell to help the police department.Scott Wigginton, I am not sure when we will reach the end and whom it will favour. But remember, I am not scared of you and I will fight with everything I have. However, I am leaving this property because I do not see any future. Especially for my mentally challenged daughter who will be left alone after I leave.It would be clever for all of us to move out as no one would like to pay for a contract for deed that has the wrong lot numbers on them, has false GPS coordinates instead of properly legal surveys, is not recorded with the county and may never be.But do not think, I accept my failure. I am going to fight you and at the same time will make sure I have the right house for my daughter. You fooled us because we trusted you. This time, we know the truth and are more powerful than before.I wish you get what you deserve and our initiative should bring the justice to every land owners doors. I also hope that you should be banned and jailed for making us grieve for so long and future land owners can be saved from your scam. 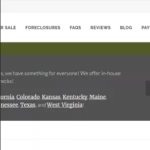