This is an archive of a consumer complaint published against Coldwell Banker AC Lawrence Real Estate at DirtyScam.com-

HORRENDOUS. The whole NYC apartment hunting is stressful enough, and having a broker who really is a royal douchebag that preys on your stressed soul is even worse.I have a small dog. I am also a resident and dont make much salary. You can say that Im pretty much setting myself up for failure.However, my roommate and I were able to see about 15 apartmentsNONE of them from AC Lawrence. The broker, J***, was not able to show us a single one.Well, lets start from the beginning. We originally had someone else, but she had forgotten about our meeting even though the meeting was confirmed via email twice.So we were handed over to J***, who told us the the market was “horrible and that since I have a dog, it would be impossible to find something.We communicated with him a few times, and also the initial lady as well, so really, they were not working together.It seemed like the two brokers were pretty much trying to get our business while competing with each other.In the end, communication waned because he said nothing was available.We eventually found a great broker (thanks, Bond!) and found a great place.We did talk to several other brokers, and while they agreed that finding a place was difficult with a dog, the market was fine, and it was not a big deal.Dont waste your time here. 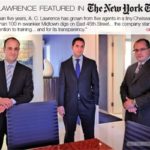