This is an archive of a consumer complaint published against Dean Graziosi at DirtyScam.com-

Dean Graziosi knows how to put alluring ads. You will see some common people who are paid huge to become the bait for all the gullible people and the ad would try to show where they would reach sooner. You get the ad and reach a local hotel to attend their free success event only to end up signing for a course that would cost you thousands of dollars.You are also offered to order his free books and as soon as you order it, you are overcharged for huge amount. Which, no one would answer how. I did pay for their course that was scheduled for three days. The free event was more about pricking individuals for paying for the course. It had nothing to do with the success event. It only outlined how they got so far and has helped so many others to realize their dreams.Dean Graziosi does is a great motivational speaker. However, his skills wont get you your bread and butter. He is just someone who knows how to trick people into paying for his luxury spending.The course that I signed for was rescheduled twice. Anyway, that is not the problem I am talking about. I must tell you the bigger ones that might get you into spending thousands of more. After I attended their course, I realized that the three day course was a joke and all they wanted was to convince people for enrolling to their other course which was double the price from this course, even higher.For the first two days, we were only told about the benefits of another course and why it was so important for us to join it. It was too expensive. Even if it would not have, the way they were using the scheduled days for the course I paid for, it was an obvious reason for not paying for the another one.They did not tell anything important. They kept endorsing their elite course to us. I did not attend their third day training as they were not going to give me the world in few hours. Someone I shared my contact details to get the feedback of the course did call me after the training. He said that it was even worse from the last two days of the training.Thank god, I did not waste my time on these people. I had already wasted a lot of money on this course only to feel like an idiot. Dean baits people into taking up his courses and does nothing to help them out.If you are one of the lucky persons whom he has to use for the ad, you may be able to earn some. But, others would be left on their own. This guy is a master in stealing peoples money on their will. You will be scammed if you ever tried to trust this guy. He may know a lot, but as a coach, he is a huge failure. 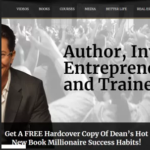