This is an archive of a consumer complaint published against Digital Ocean at DirtyScam.com-

I signed up for the hosting service. There was some discount going on with $50 off with digital ocean. At first, I thought it was a great offer, only to be disappointed later. When I opened the account and registered online for the same, I was asked for too many personal information. I really did not like that but filled it anyway.Later, I received an email from them about all the other details and the payment process. Everything was okay until they started using their service. After a week of running the website smoothly, I started facing intermittent problems. A lot of times, the server was not available. My IT guy told me that the site is mostly offline to our users because of the hosting problem. It would go offline for five minutes and then would come online all by itself.I emailed the problem to the company and no one answered. I was leaving for another city the same night and when I came back after a week, I found out that the company had not replied yet. However, the worse was still to happen. The next day, the server went offline and did not turn up for the entire day. They did email that there was some maintenance going on. But what kind of hosting company does so. This was very frustrating. The problem was that the server did not come online the next two days as well.For entire three days, my website was down. Being a businessman, I have never faced such problems before. Companies like these promises 99% uptime and deliver nothing compared to their claims. This is what I learned from digital ocean. Later, I tried to reach them through email and complained about the same.I had registered my debit card with them for payment. However, while I was returning back from the flight, the debit card got lost. And, I was not able to use it. I requested the company to cancel my service and provide me with the final statement to stop the service. They replied late. It took them a week to reply to that query.I was not able to pay using any other card or method. So, I again mailed them to provide me with an alternative to pay using another card or method. I even asked if I could pay over phone. However, they said that they would not allow me to pay over phone and requested me to use another card.I tried number of times to use three different cards and none of them worked. They said that I may have to wait a little before they could help me process the payment using another card. In the meantime, I asked them to cancel the services. They refused. They said that in that case they would have to send my case to the collection team which would affect my credit score and suggested to use the services until they find a solution.How tricky of them. Anyway, I did not have much choice and I agreed. But the problem was not solved right away. It took them another month to come up with a solution. And, they kept charging me for the shitty service they provided. During that course of one month, I went through so many problems because of the website. In addition, they even blocked my account after I was not able to pay for the service. They kept charging me for one month and then they added that bill without letting me use their service. I had to use another service provider for hosting my website and they were awesome. ON the other hand, digital ocean did not even try to answer anything in detail. Reaching them using phone or chat also seems impossible. These guys are cheaters.However, the problems did not end there. I feel as if they sold my personal details to some spammy companies. As soon as I cancelled my services with them, I started receiving calls and emails, purely marketing ones. These were too irritating. I remember, they said they wont be sharing my critical information that they asked in the first place.But they terminated that clause. I know this because one of the sales guy I was talking to said he had his sources. I cannot confirm though. However, he had the same phone number I gave to digital ocean. This was a personal number that not many people know. I use it for making calls myself to my family. And, it stays at home most of the time. This is what made me feel that these guys are into selling data to different companies.There is no good reason I can think of why suddenly every marketing company started approaching me. It is clearly a hell experience that digital ocean put me through. I am never ever going to use the services offered by this company and would never recommend anyone else to do the same. These guys are not worthy of your trust.They would increase the price and then would offer deals to lure customers. Once that is done, they would start making you feel like they own you. They wont expect you to call them and would do nothing to help you with your issues with the service.The company is fake and uses all the wrong tactics to attract customers. Also, the spam messages and phone calls are something no one likes to experience. I have seen the worst of all. Any company providing me something better than this digital ocean would seem amazing from now on. They have put me through a lot of headaches. My company has suffered and so do my employees.Before finally closing my account, I asked them if they have any answer for why these problems occurred. And, they had to say just one thing  none of this matter now. How rude of them. These guys are frauds. 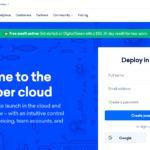