This is an archive of a consumer complaint published against Don Le, CPA at DirtyScam.com-

My family and I have been using Don Le CPA for many years without any problems, but a few months ago, I received a letter from the state tax franchise board saying that my filing, prepared by this office, had omitted some company stock options from my taxable income and is charging me back taxes plus nearly $300 in interest for having not paid in 4 years.I came back to this office for advice and was met by Robert (Hoang) Le, who was not the original CPA who did my 2009 taxes but offered to help.Right away, Robert claimed that the taxes were filed correctly, that the state reassessed my taxes in error, advised me that I did not have to pay any more taxes, and prepared a protest letter saying that the state was wrong.The state sent back several letters saying that my taxes were prepared incorrectly and rejected the protest, including a line by line breakdown of number errors.I even went to my companys financial person and they said my taxes were done incorrectly.I went back to Robert and he said that I should just pay the state then to “get it over with.I wanted to know whether his initial advice was correctthat the tax filing was correct, and he got flustered and started saying he didnt have time to go check the numbers and didnt want to deal with it.WHAT THE @#%$!!! What CPA wont tell you the numbers that went into your filing? And why was he so sure in his initial recommendation if he never had the numbers to back up what he advised? I understood that it would be a hassle for him to check what another accountant in that office filed, but its his professional and fiduciary responsibility to do so!I wanted this office to be held responsibile for the interest costs accrued, but he said it wasnt his offices responsibility to pay interestonly penalties.Um, this interest was accrued by incorrect filing, not because I sent a late check or anything.The more he pushed back, the more I wanted to get to the bottom of it.He said he didnt want to open up old records because “he would be yelled at.What is he, a child? He wasnt the original filer and I wasnt going to “get him in trouble.He decided to offer a deal that he would do my taxes for free for the next two years to make it all go away, but refused to offer it in writing.It was clear that he just wanted me gone. He was so rude that I didnt want to deal with him anymore and took the deal and left.Unbeknownst to me, my father (who also has taxes done there) called to complain that I shouldnt be responsible for interest accrued.He chewed out my dad, lied that its my fault that I CHOSE not to pay taxes, that his office filed correctly, hung up on my dad, and then sent insulting emails to me, saying that he was disappointed in me for not honoring “our deal and had thought I “was an educated individual and that my father “understands nothing.This was completely uncalled for as I was not involved in any of that.I called the office today to ask to speak to the owner, Don Le, but my call was returned by Robert who proceeded to insult and yell at me and said that I could go ahead and complain about him to the board.I have a clear paper trail of everything that happened, from the protest letter prepared by his office and signed by him, to the letter from the state tax board saying that my filing was prepared incorrectly, not to mention the insulting/harrassing emails to me.None of this shows that I had done any fault to accrue interests on my own such since I paid the exact amount required by Don Le CPAs filing.Additionally, Robert has done everything in his power to block me from getting a hold of the owner of this office.Not only will I no longer do taxes with this office, I am prepared to file all the complaints necessary about this office, from the state board to consumer sites and beyond.They lack fiduciary responsibility for their filings and are also unprofessional and insult/threaten their clients because they dont want to check their records and cut a ~$300 check that I rightfully deserve. 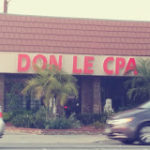