This is an archive of a consumer complaint published against Dr. Alan Tran at DirtyScam.com-

I wanted to like Dr. Alan Tran and his team, however, I came out extremely disappointed.In short summary, the reasons why: Poor Customer Service & Poor Communication (among office staff & doctor) Not clear on pricing of services (2-3 months in) Mismanagement of paperwork with insurance company Long time span between appointments Putting his ego as more important than the needs of the customerStory:I came in for a Rhinoplasty and Septoplasty as a recommendation from my Ear, Nose and Throat Specialist.I had received a fairly competitive quote from another Plastic Surgeon for the Rhinoplasty, but he wasnt able to complete the Septoplasty portion of the surgery.On the first day of meeting Dr. Tran, I asked if he could match the Rhinoplasty portion of the surgery in terms of pricing.He wouldnt even bother to look at the other Surgeons quote, saying that his pricing was fairly standard and the he wasnt really the type to budge on his pricing.His office administrator however, assured me that Regal Medical Group would most likely assist in paying part of the surgery as there were many cases of such instances before.I was skeptical of her claim, but I decided to wait to see how things played out.Next came the second appointment about 1 month later.I brought my X-rays in and took pictures of my nose.I asked about the pricing again to see if we could get a firm price on the Rhinoplasty portion so that I could be ready in case insurance didnt help pay for it.Again, they didnt want to give me any type of ballpark answer.I was starting to become worried as I needed to know the pricing before I wanted to commit to the Rhinoplasty portion of the surgery.Knowing that the insurance company sometimes takes a long time to verify authorizations, I decided to give them a call to see if the authorization were being processed.Regal told me that there was nothing in the files at all. However, Dr. Trans office claimed they sent it in 2 weeks before that.It took me around two full days to sort out the discrepancy between his office and the insurance company.If I hadnt called, it would have never been sorted out.Finally, my insurance had fully authorized the surgery (for the Septoplasty portion of the surgery).I called to go ahead and make an appointment for the Pre-Op & Surgery date.It took a while for them to finally get back to me, but when Lena (the office admin) finally got back to me, she acted as if she had never talked to me about the Rhinoplasty portion at all.In fact, it was almost assumed in her mind that I wasnt even trying to get that portion of the surgery. This was just about the last straw in my mind. It was 2-3 months in, and the office still couldnt give me a firm pricing on the Rhinoplasty portion.On top of that, the office admin acted as if we had never talked about it.If I wasnt going to get the cosmetic procedures done, I would not have been recommended to this office to begin with.These are things that should have been clear from the beginning. (It really felt like a bait and switch tactic)Still upset, I made an appointment to see the doctor anyway. I was ready to talk to him about the miscommunication between his office and I.I wanted to see if we could reconcile the differences in understanding on the procedures.I even considered not doing the Rhinoplasty portion of the surgery anymore since it seemed to be too complicated.Five days later, I receive a letter in the mail stating that “After careful consideration, I do not feel that I could meet your expectations I call the office to find out what had happened.They told me that they didnt think they could meet the expectation of an “upset customer.You would think that they would be able to empathize with someone who was upset because of the lack of clarity and mismanagement, but I guess that was too much for them to handle.Stay away from this office before you waste your time too. 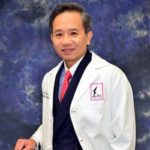