This is an archive of a consumer complaint published against Dr. Alex Zand at DirtyScam.com-

I saw a doctor in a walk in clinic on a Sunday. Dr. Alex Zand did some blood test on me and told me I needed to see my regular doctor, Dr Zand, as soon as possible.She was concerned it was a malignancy. A couple of days later, I saw Dr Zand who told me that that doctor didnt know what she was talking about and that she was just a general doctor.He told me to ignore her and that the rash I had will go away.For the following three months I kept going back and tried to explained to him that I felt extremely tired and with pain in my groin area.He said I probably pulled a muscle and to go home and relax.I told him I was feeling depressed and he told me that well talk about it on my next visit which never happened.Every time I was there, he seemed too busy and just rush without really listening to me.I ended up in the emergency room and later on I was diagnosed with lymphoma.The one star is because I had to put a rating. He does not even deserve one star. 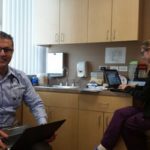