This is an archive of a consumer complaint published against Dr. Azucena Arguelles at DirtyScam.com-

What makes this relevant: out of hundreds, Dr. Azucena Arguelles is the worst doctor I have ever seen, in a completely literal sense.She might be able to treat dandruff, but shed probably cut off your nose in the process.She had to use reference books to remember minor details of dermatological conditions so common that I knew them even though Id never had them.When she took a biopsy, it hurt. When she took out the stitch, it hurt more.Her hands were shaking like an addicts in withdrawals, and she sliced my skin two or three times before she managed to slice the thread.Ive had a subsequent skin biopsy in the same spot on my other leg, and that practice chose to send me home with a stitch removal kit (the same tools Dr. Arguelles was using) and instructions on how to take it out myself in a week.I did so, and even though Im certainly not a doctor, I didnt repeatedly cut myself.When the biopsy results came back from UCSF, Dr. Arguelles handed them to me, said she had no idea what they meant, and *literally* suggested I go home and run a differential diagnosis on myself.In many many years of seeing doctors, I have never heard this suggestion, even from doctors I was well familiar with.Subsequent dermatologists looked at the results from the biopsy and my general presentation, and were instantly able to generate a list of the conditions that could have caused my symptoms.One of their four initial guesses was accurate.Take someone to Dr Arguelles if you dont like them, or are trying to convince them all American doctors are incompetent. 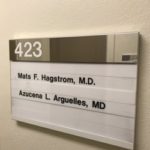