This is an archive of a consumer complaint published against Dr. Benson Frederick at DirtyScam.com-

First off, I would like to say that I would give Dr. Benson Frederick a 5 star rating.He is such a wonderful doctor and could not be more caring and attentive.I have been going to Dr. Benson for over a decade now and loved his old staff.But his current staff (two ladies) are so terrible that I am dropping it down to 1 star.They act irritated by virtually EVERYONE who walks in the door or calls.As you are sitting in the waiting room they actually discuss patients and talk terrible about them.While I was waiting my turn they proceeded to talk about each patient that came in or called negatively!They did not seem to care that there were people in the waiting room that could hear them.In addition they put people on hold while they discussed their personal life.I actually overheard another patient while I was there mention to Dr. Benson that his staff was rude and was surprised at his response.He did not address the patients concerns at all or seem to care!Dr. Benson, do something about your staff! You are too good a doctor to be pulled down by unhappy and just plain rude staff members!At the very leastTrain them that it is not appropriate to be rude and talk about your patients especially while other patients are in the room!You are the best Dr. and because of this I continue to go to you but I actually dread the few moments that I have to deal with your staff!They put out such bad energy and could not be more negative.To the two ladies I speak of. Quit already if you are so unhappy!Please! 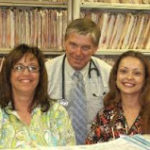