This is an archive of a consumer complaint published against Dr. Charles Andrews at DirtyScam.com-

Im giving Dr. Charles Andrews 1-star because I feel like he does the bare minimum of care.I originally went to Dr. Andrews because hes close to my work/home, but he also had high feedback here.However, after being his patient for 2+ years, Im embarrassed I didnt try and find another primary care doctor sooner.There are four main issues I have with Dr. Andrews and his office.First, its almost a guarantee that youll be waiting in their waiting room for at least an extra 45 minutes on top of the time of your appointment.Second, once you get your vitals and taken back to an exam room, youll be waiting there for at least another 30+minutes before he, or anyone else, comes by to see you.Third, after all that waitinghe literally wants to rush through your appointment.Fourth, and the worst part, is that his care is basically ineffective.He never gives you a solid, or even halfway decent, diagnosis/treatment strategy and instead will just fire up Google, then bring up WebMed or another site that provides an overview of one of the five things he thinks it could be, reads it verbatim off the screen to you and then scribbles it on the back of the exam sheet for you to take with you and research them to see if any apply to youGood Grief!It almost ended up making a hypochondriac because I would always leave with more concerns than when I got there.Over 2+ years, I probably had roughly 8 visits with Dr. Andrews and at least half of those were unnecessary follow up visits that couldve been avoided if he actually took the appropriate amount of time to listen and attempt to diagnose what I later found out was very common ailments.Once I realized the issue wasnt my health, but Dr. Andrews quality of care, I made another appointment with a different primary care Dr right around the corner and it was almost an immediate improvement. 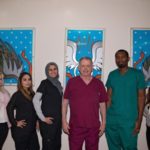