This is an archive of a consumer complaint published against Dr. Dean Toriumi at DirtyScam.com-

I wanted the rhinoplasty and for the same reasons I consulted Dr. Dean Toriumi. I met him the first time when I was seeking the cosmetic surgery a year back. However, this guy turned my life a complete disaster. I have waited a year to write this review because I wanted to give him enough time to prove the surgery, he did on me was right.Whenever I talked to him about the surgery that did not go as discussed, he suggested that I should wait longer to realize the actual effects of the surgery. He every time asked me to wait a bit more. I gave him enough time to prove his claim, but he failed.When I started consulting Dr. Dean, I was very clear about my expectations. I told him that I needed to fix my breathing problems as well as wanted to improve the appearance of my nose. During the consultation, he never asked me any particular change that I was looking for. This was a red flag which I realized later.He did provide me a form to fill the preferences. He showed me an image how the nose would look after the surgery which has nothing different but just a straightened nose. He talked me into focusing into the breathing problem more than the cosmetic surgery for appearance. He did not even discuss the form that I filled which has few major preferences that I wanted.After the surgery, my nose looked bulky with downward tip and the tip looked like a bulb. My nose did not fit with the other features on my face. When I asked why he did that to me. He said that he did not know what I was looking for.He must have discussed it with me or even by looking at the form, he would have known what I wanted. The worst part is that my breathing is still not improved completely. While laying straight on my back, my nose still feels stuffy and is difficult to breathe that way. After talking over and over again, he did offer me a fix for the surgery.And, I did meet him at his clinic. However, he still seemed more defensive that trying to provide resolution. Moreover, he wasnt talking to me as he did it the last time. I was too scared to go with the surgery with him. So, I decided I would take the losses and would go see another doctor. As of now, I am like this with bulky nose and all my pictures are scary.I am looking for another doctor and this time, I am being cautious about bumping into any naïve doctor. I would be doing proper research before giving someone the right to change the way I look. And, this time, I would be careful while choosing my doctor.Dr. Dean is an unprofessional and unskilled doctor. His reviews are fake. He knows nothing about cosmetic surgery. 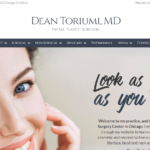