This is an archive of a consumer complaint published against Dr. Garrett Smith at DirtyScam.com-

Dr. Garrett Smith was fantastic in every way people write about — at first. He was kind when my cancer recurred, too.But when the cancer wouldnt respond to the treatment he recommended and I started raising some questions about options and additional consultations, things got very difficult.Like another reviewer said, he became verbally abusive (in front of a witness) to a point where I was in shock and tears.I know doctors are human and everyone can have a hard day, but once things got rough, they just went downhill over a period of a couple of weeks.It was crushing to have him turn from “the most wonderful oncologist in the world to someone I couldnt recognize.Obviously some people have super positive experiences with him.Its important to balance this out with some other experiences — like mine.After I left Garretts practice and moved to a new oncologist and I saw how that practice was run — superbly! — I started re-evaluating my experience with Garrett and got really worried about a number of his practices.When I was his patient, these things were going on — I dont know where its at now:* He didnt have a nurse on staff (nobody to get the extra help often needed, questions answered, etc.);* Patients were in the chemo room alone most of the time (someone I know from his practice had an allergic reaction and had to wait for someone to hear the bell ring!);* He didnt check blood tests before infusions some of the time (mine were usually done minutes before the infusion, with results arriving the next day — a high risk if blood counts are too low for a treatment!);* He didnt keep detailed records (so when I had to go elsewhere for a special treatment, he gave them wrong information because it was never written down — just in his head!).If youre not a cancer patient, you might not get how unsafe these practices are.. Im amazed that he hasnt had malpractice suits with all these safety problems!On top of all these problems, my new oncologist turned out to be more compassionate, with better communication skills, and with much more humility.And the staff at the new center have been so much kinder and more helpful, too.Finally, at my last appointment a couple of years ago, when I told him I wanted to explore options suggested by someone else I consulted with, he informed me that there was nothing more Western medicine could do for me unless I did the one treatment he recommended to me, which I had told him I didnt want to pursue.He essentially gave me a death sentence — none of his famous hugs at this point.. Im still here, obviously, and I am immensely grateful to my current oncologist.As she said to me early on: “If someone else has a better idea than I do about what to do next, of course Im going to go with it. Im not here for my ego. Im here to help you live!Its hard for me to write negative things about anyone, but after some time away from Garretts practice, I keep thinking that I must give this picture, at least to balance out all the positive ones.I feel protective of cancer patients. We are so vulnerable and so desperately need to trust our doctors.Unfortunately, while Garrett draws extreme trust and loyalty from many patients (including from me at first!), neither his practices nor his communication skills hold up over the long term — at least not when treatment is unsuccessful.Heartbreaking. Not what anyone needs, ever, let alone when fighting for our lives. 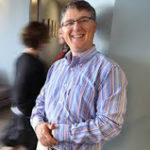