This is an archive of a consumer complaint published against Dr. Hoang Tuan Anh at DirtyScam.com-

Dr. Hoang Tuan Anh, is basically, the worst of the worst of all the doctors Ive ever met.Every time I go there for a regular checkup, I would see a bunch of people waiting, and thats not because he is famous or so great that a lot of people wanted to go see him.His assistant would assign loads of patients appointments in a very crunched-time manner despite the fact that the doctor does not know how to manage his time wisely.For example, if his opening hour in the morning is 10am, there will be one to two patients WITH APPOINTMENTS waiting for him.Oh but I forgot to mention that he doesnt come until 10:30-10:35! If you think thats bad, try getting an appointment in the afternoon.I once had a schedule with him at 3pm, but I waited and finally saw him walking into his office at 4:20.. and did I mention that his lunch hour ended AT FREAKIN 2PM!In conclusion, if you dont mind wasting 1-2hours+ sitting on a chair waiting while your doctor is munching in leisure, go ahead and make an appointment with him. 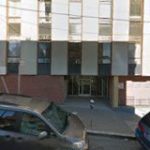