This is an archive of a consumer complaint published against Dr. Jeffrey S. Roh at DirtyScam.com-

I was referred to Dr. Jeffery S Roh through a friend who has great connections every where. He has high level access to various celebrities and politicians and has great ties with important people. When he said that I should meet this doctor, I did not give any second thought and didnt even check the reviews and other details on the internet.I straight away called his receptionist, Ashley. I know it was her because the voice mail had her name. I called for more than 4 times which I remember. But, she never answered my call. Later, I had to call the desk number.When she returned the call, she was too rude. I could not stand anything that she said. She did not even acknowledge and apologised for missing my call. I believed that she had an attitude which would be difficult to manage with. But was calling to consult Dr. Jeffery and ignored her behaviour. I was booked for the other day for the appointment.I arrived there on time. However, instead of making prior appointment, I had to wait for two hours to see the doctor. When finally she called my name, she did not have the etiquette to apologise. Again, I ignored as she was not the one who mattered.I rushed to the doctors cabin. I had filled all the paperwork before getting inside and all the information was listed there. When I entered, doctor did not even check what I had mentioned in those forms. He directly asked for the reason I was there.He interrupted a lot in between and it seemed that he was in a rush. I was the first time patient for him and I deserved detailed consultation for deciding about the surgery. However, he only listened to me for 10 minutes and said goodbye. He asked me to book the surgery date with his receptionist. He did not even ask for someone who can come with me during the surgery.I was not going to let him inject the syringe in my spine without someone accompanying me. This place is shitty and full of rude people. The doctor was rude too. Later I checked with my friend if he was the same doctor and I was disappointed to know that he was. With my friends reference, I had great expectations with dr. Jeffery.I called to cancel all my further appointments with the doctor and Ashley was again too rude to acknowledge me being responsible. Not just that dr. Jeffery is rude and incompetent which is very clear with the way he handled my case in the first go, he is also incapable of hiring the right staff. Or, he chooses people who are similar to him.I was very disappointment by his gesture and medical practice. If he is not bothered about his patients time and problem, why should anyone reach out to him. There are so many great surgeons and dr. Jeffery is definitely not among them. 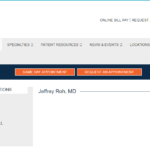