This is an archive of a consumer complaint published against Dr. Julie Hwynn at DirtyScam.com-

Theres a reason her rating is so low. Avoid at all costs.This review is mostly for Dr. Hwynns office staff (the doctor herself is fair enough, seemed like the typical doctor during my visit).Ive been trying to get a copy of my medical records. Sounds simple enough, right?Day one, the receptionist states that the person in charge of medical records has gone home and that I needed to call again the next day.Fair enough, I did so. The next day, I told the receptionist that I needed a copy of my records.She said that it was against the offices policy to give a copy of a patients medical records directly to them.That struck warning bells right then and and there. She then insisted that I needed a medical record request form from my physician to get the records (not true).Since it was close to closing time anyway, I decided to call back the next day yet again to request a copy of my records.The receptionist (another person) was polite enough and looked up my name and proceeded to read/summarize the report she saw in my record, stating that she wasnt quite sure why I needed it.She then stated that the person working in records wasnt there (no surprise there) and that she would pass a message on for the person to call me the next day.The next day came and went, no call from anyone at all. So I called AGAIN and a different receptionist answered.I went through the whole explanation, stating that I needed to get a copy of my records.The receptionist answered, “I dont know what the receptionist told you, but we dont work in medical records during clinic and that the person in records wouldnt be in until next week!I told her that the previous receptionist had told me that they would be in that day.She demanded the name of the receptionist and I didnt have it, so she claimed that she couldnt help me and blamed me for misunderstanding.She also added that they charge $25 for copies of the records (other offices typically charge $5-10, at most $15 for copies) and it would take SIX DAYS to get a copy of my records.To others who might face the same problem, after FIVE DAYS you must have access to your records or else go directly to the medical board and file a complaint.Save yourself the headache and dont come here in the first place.TLDR: Ridiculously inconsistent and unreliable receptionists. Long wait times, inconsistent billing.Demanded a higher copay than my actual copay amount, also ringing warning bells. Typical office, so-so doctor overall. 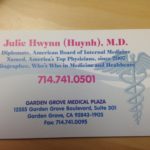