This is an archive of a consumer complaint published against Dr. Kanwar T Mahal at DirtyScam.com-

I actually really like both Dr.Kanwar T Mahal and Amber Mahal. They are kind, patient, and thorough in their time with me.However, Im not sure how this continuously happens, but prescriptions and referrals have not one time gone off without a hitch.Once it was an antibiotic that was never called in after multiple calls to the office.  After the weekend of no Rx, I decided to heal on my own.The next was for two management meds, which I made an appt for to update the prescription.It was never called in, and when I called them to ask why, they said I needed to see the doctor to renew these.I explained that I had just seen her for this purpose, but was still required to go back for another appt.I conceded, because I truly like the doctor. But then switched to Kanwar, hoping this end would not be as poorly managed.However, after my first appt, his office sent my prescription order to the wrong pharmacy.Twice. This was not an easy remedy. It should have been. It required one more visit to the office.My last example, and there are more, was this Monday when I needed a refill, and called in to the pharmacy.They faxed the request to Mahals office, although this is a maintenance med that should not require this (for whatever reason, he had not allowed a refill).I called the office to make sure they got the fax, trying to head off any glitches.The doctor was on vacation and could not refill this. I asked for the doctor on call, but his wife, the other doctor, was on vacation with him.I asked for their back up doctor, which there wasnt one.The receptionist said the MAs were in charge! Frustrated, because this is an antidepressant to get me through the suicide of my husband, I asked if Dr. Mahal can be reached to refill, since I cannot miss a dosage.They said they would email him and get back to me. I called 3 times that day, to no avail. At the end of the day, they left a message to say just call the pharmacy to refill it.They also said I should not wait til the end of the prescription to refill. But remember, this was supposed to be a 3 month maintenance refill, that he actually did not give a refill to.Back to step one. I did call, hoping somehow Mahal had refilled, and he hadnt, and the pharmacy cannot refill it.My last attempt was to call the swithboard, because by then the office was closed.She read a script, “per doctors orders, he is not to be notified of any need for prescription refills. I am three days without the antidepressant.So although my 2 year experience face-to-face with the Mahals seemed effective and efficient in diagnosing problems, absolutely nothing else was in terms of follow-up.By the way, this has been the same experience for my two adult children, who are both looking for a new doctor. 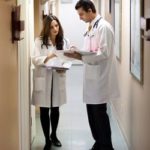