This is an archive of a consumer complaint published against Dr. Kevin Hatfield at DirtyScam.com-

I went to Dr. Kevin Hatfield for several years. It wasnt until I scheduled a physical, and him and his staff all questioned me as to why since it was 9-10 months since my last one.Instead, I was lectured on what is involved in a physical then he billed it as a regular visit not a physical. It was a huge waste of my time.When I went to complain to his boss about it, his response was it was a misunderstanding and that if they didnt waive the charge he would write it off.I question his ethics, and most of all his intent to provide health care to patients. I have high cholesterol and this physical was important to me.Now, after several months of fighting a $200 medical bill which I received nothing but grief, I have the time to find a new Dr. I would think twice before going to the Polyclinic.My wife and I have not been there without having a billing issue, tests that we were charged for that were not authorized by us, etc.If you want to have high bills, incorrect billing, and have no one give a crap on following your health plan than this place will drive you right into the ground. 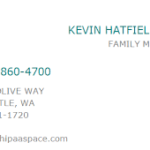