This is an archive of a consumer complaint published against Dr. Mark Campbell at DirtyScam.com-

Dr. Mark Campbell needs to retire as well as the receptionist woman. She is condescending and nowhere near pleasant in any way.Everything is a bother to her when I come in or call in with questions.The assistant, Anita is GREAT and positive and friendly and the ONLY shining beacon in that dreary what I now call the hell hole.I recently left Dr. Campbells “care (if you can call it care) because getting anything done through that office is like pulling teeth and like Colleen, I got an unecessary prescription which I did not fill and I had to buy a blood pressure monitoring system out of my own pocket at his direction.I went in for a sleep study referral on my first visit there, so he took my blood pressure and I asked if it was high because I was concerned. He said no, it was fine.My next visit was about a month later for a complete physical.I was about 10 minutes late so he decided to skip the physical, take my blood pressure and just ask me some questions.As I said, I was late, and I was stressing because I was late, I was stressing over getting a complete physical, and did NOT want to do it, not too mention that I had a really hard stressful day at work.He took my blood pressure as soon as I got there and said that it was high and that I needed to get on blood pressure medication right away.I mentioned that it was just fine the last time I was there and that it might be high because of all the reasons I listed above.He completely dismissed it and said I also needed to buy this blood pressure cuff machine (which was a good $80.00).Any other questions that I asked was an issue because the Dr. would either talk over me or dismiss my question with a quick answer and not looking into the issue I was asking about.For example, I said I had a ringing in my right ear almsot constantly for a year and he said “Thats OK, ringing is normal.I told him it was not the normal ringing I hear sometimes when it is dead quiet, it is loud and almost constant.He ignored that and moved on to another question.Then he asked me a question which revealed my sexual orientation and he immediatley told me I had to get an HIV test even though I told him I was in the same relationship for over 10 years now.He still said I had to get one, which made me wonder why exactlySo I left there with an unecessary prescription for high blood pressure (that I refused to fill) and told to buy some expensive machine and no complete physical.I was really put off by the whole experience and I went to a hospital a few days later to see a relative that was there and I got a second opinion on my blood pressure from the Dr. there. Sure enough, my blood pressure was fine.I explained the whole scenario to this new Dr. and he agreed that I did the right thing in getting another opinion and they stated that when I told Dr. Campbell what I did and based on my previous blood pressure, he should have let me rest for a bit and then taken my blood pressure a second time to confirm the need for medication.I reccommend staying FAR away from this Doctor mark Campbell 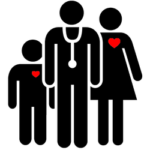