This is an archive of a consumer complaint published against Dr. Mark Perl at DirtyScam.com-

I have worked with many doctors in the past. Ive seen good doctors, and Ive seen bad doctors. Dr. Mark Perl is the most unprofessional and negligent of them all so far.I dont say that lightly. What are my reasons for making such a strong statement? Here are three:1. He does not know what medications Im taking, even though he prescribed them to me.In my latest visit, we were discussing my sleep issues, for which he prescribed medication during a previous visit.When I struggled to remember the name of the medication and asked him, he first said the wrong medication, and then said, “I dont know!You tell me, very indignantly, as though it was not his responsibility as the prescribing doctor to know.2. He doesnt recall my medical history when I visit, and he asks for it again and again.Poor sleep has always been one of my chief issues.Every time Ive met with Dr. Perl, weve discussed my sleep issues.Yet at my latest visit, when I started talking about my sleep issues, he asked very earnestly, “Has this been going on for some time? This is one of the chief reasons I am seeing him.Its baffling how he would not know this, or did not write it down, when weve discussed this extensively at every previous meeting.Also at my latest visit, I started picking up where I left off about a topic I had told him during my previous visit.”The housing situation has gotten worse, I said. He responded by saying, “The housing situation — can you describe it? This was a familiar pattern by now — asking for information I already described in detail before.Previous times I would overlook these slips — maybe part of his therapy style was for patients to repeat themselves — and just retell what I said previously, but since it was becoming a pattern, and I was starting to worry if it was in fact a therapy technique or if he really just didnt take notes, I decided to ask him gently, “Can you remind me what we discussed at our last meeting? He had his notes from previous visits in his lap, so it wouldve been easy enough for him to jog my memory.Instead, he answered condescendingly, “David (not my real name), Im not going to play games with you!3. He is factually wrong about basic knowledge of medications he prescribes.He prescribed lorazepam 0.5 mg per night to help me with my sleep.When I told him that I didnt feel any effects at 0.5 mg, and that Ive read that 2-4 mg is the recommended dose for insomnia (I try to stay educated about my medications), he said to me, “I dont know where you got that, but it is wrong.I would never prescribe someone that dose — that dose is at addiction levels.However, thats incorrect, and you can check that for yourself with a quick Google search.In fact, just to make sure the online resources werent wrong, I asked a relative in medical school afterwards to check the official medical database of drugs (Lexicomp), and hes confirmed that the 2-4 mg dose is correct for insomnia.When I gently tried to point out that I was pretty certain 2-4 mg was the recommended dose for insomnia, Dr. Perl flat-out said to me, “David, I dont think we can work together.Youll have to find another doctor. I walked out early, and that was the end of our relationship.I dont think this needs to be said, but what does a good doctor look like? A good doctor is someone who knows your medical history, who knows which medications he prescribed, and knows basic facts about those medications. Dr. Perl is none of these. 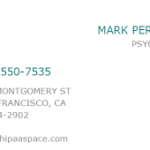