This is an archive of a consumer complaint published against Dr. Matthew Davis at DirtyScam.com-

I have been a patient of Dr. Matthew Davis for about 4 years, although I am not one that goes to the doctor all of the time.But when I have gone, he would not listen to all of my concerns and I felt like I was back at Kaiser where the doctors have a stopwatch attitude.I used to go to him for my bi-annual physical, but he started billing an extra $99 over the $25 co-pay to deal with them.First real concern, I suffered kidney stones, he couldnt do anything but refer me to a urologist. Feel free to read that review. It was a really good referral NOT!Then, the last time I went in for an ongoing dermatological concern he ordered some labs, oddly enough it seems he padded the labs, as I can think of no reason for him to run a battery of STD tests, HIV/AIDS, Hep, and others.I questioned this as I knew that I was negative for them for I am chaste.Anyway, so for the tests that were ‘useful they turned out not to be so useful.When I went to the dermatologist (separate review), she wanted to see the labs.So on her stationery they faxed a request to his office I am waiting she comes in about 10 minutes later with the results a fax came back with my last name scrawled on it, the doctors stamp in the middle of the page, followed by “No records on file I was shocked.I called on my cell phone and went off on the guy that happened to answer the phone, I was a royal a$$, but 30 seconds later I heard the fax machine ring and she came in with several pages of lab results.I spoke of usefulness, I am by no means a medical professional, nor do I understand what most of these results mean, but I can say that she said they were useless and unrelated to my concern, and ordered another battery of labs.Sorry, got off on a secant, so when said labs came in they said to come in to the office for an appointment.So I did, I took off work early and raced down to his office to make the appointment they assigned.I got there like 15 minutes late, because of traffic. I checked in, they didnt know why I was there So the girl went in the back, got the results, the original of the same page I received in the mail, which said everything was normal AND to be sure and keep the appointment.So she hands me the paper and proudly announces that she saved me the $25 co-pay.I asked, thats it? she went back and asked Dr Davis then came back with the report, he says you are healthier than he is.Have a nice night. So after leaving work early, rushing, and fighting traffic to get there I get handed the same piece of paper I am holding a copy of.Nothing addressed about any of the concerns I had, nothing else about the tests, nothing whatsoever. 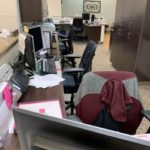