This is an archive of a consumer complaint published against Dr. Miguel Delgado at DirtyScam.com-

I went in for a consultation with Dr. Miguel Delgado, and got turned away for revision eye lift surgery.I appreciated his concerns and comments, and he pointed out the problem with multiple revisions can lead to scaring, which doesnt take a rocket scientist to figure, but I wanted him to talk in depth about the potential risks and such, but instead he proceeded to point out that “my impatience is part of the problem after telling him Ive been frustrated for months trying to get my eyes evened out.Then I told him how plastic surgeons have different opinions from his, before I went in for my consultation I did research and made some phone calls, then Dr. Delgado proceeded to say that Doctors are always going to have differences of opinion.But theres got to be common grounds in between differences of opinions, otherwise, whats the point of it being a profession.Before the so-called consultation ended, he told me to wait about 4 to 5 months and to “calm my temper.Like, who the **** are you? All he did was made some points and I invalidated his points with my points, waste of time and money.Dont consult, unless you want to talk to an idiot. 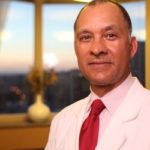