This is an archive of a consumer complaint published against Dr. Octaviano Roges at DirtyScam.com-

We selected this office because of the great reviews. The staff here is friendly and in our first few visits Dr. Octaviano Roges was thorough and pleasant.However, at my husbands last appt he arrived 5 minutes before the appt and the office was locked.I called the office, no answer. He waited for over 30 minutes before anyone came to open and at least another 30 minutes before he was taken to a room and an additional 15 to 20 minutes before he saw the doctor.Though this was a frustrating experience we thought it was an isolated incident. Unfortunately, that is not the case.Today we both had an 8:15 am appt (which the office confirmed the day before), we arrived at 8:10 but the office was locked.I called the office and the exchange office stated another patient had called as well and left.A staff member arrived at approximately 8:30. Another patient arrived for an 8:45 appt.We were placed in a room about 10 minutes later. At 9:15, still no doctor.The doctor arrived about 9:20. However, rather than coming in to see us, he went to attend to the later appt.We were patient up to that point. Once he went to the patient room, we chose to leave.We stood in the office lobby as the staff printed our records/lab results for a good 20 minutes.Unfortunately the doctor did not even have the courtesy to come speak to us at that point (I did hear the staff let him know we were leaving).This could have been our permanent family physician but we are clearly not that valued of patient to Dr. Roges. 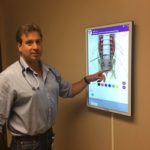