This is an archive of a consumer complaint published against Dr. Patel Surendra at DirtyScam.com-

I am switching primary doctors at the end of today. Worst part of the entire visit is the Doctor Patel Surendra tried to deny me for having my service dog.First he demanded to know what my service dog was for when I refused to tell him but showed him that she is licensed by the county and state as a service dog and he refused to allow her to go in the back with me.According to the ADA the hours listed are wrong. They do not open until after 9am, there is no appointment reminder the day before your appointment.He does not allow mothers to bring their children like most doctors.He charges $25 per paper that you would need filled out whereas most doctors include that in your office visit fee. 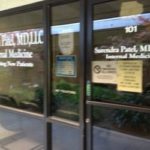