This is an archive of a consumer complaint published against Dr. Payman Khorrami at DirtyScam.com-

Dr. Payman Khorrami tried to push unnecessary tests, pills, and other doctors on me. It was extremely uncomfortable and unprofessional.Dr. Khorrami was not helpful to me at all. He tried to push a bunch of unnecessary tests on me and when I called him out on in he even admitted I probably didnt need them and didnt order most of the tests on me.I needed to get blood drawn and I told them I pass out.I have a condition called vasovagal syncope that I have had forever, and I pass out frequently because of it.I told this to the Dr. and he told me its very normal and they will make sure I lay down when they draw my blood.As I was waiting to get my blood drawn I hear the Dr say to the nurse “She gets a little light headed so just watch her.I told the nurse no I literally will faint so I need to lay down.Then the Dr comes back in and says “I think we should do an EKG on you because its very unusual you faint and we should make sure your heart is okay.I understand being concerned, but literally 3 min earlier he told me its completely normal and nothing I have to worry about.I also know its 100% normal because I have been dealing with it for over 10 years.He then starts to comment on my skin and my hair and saying he can write me prescriptions.I came in for a digestive issue (which was never resolved) but instead he was starting to push pills on me for things I didnt even need.I got my blood drawn by a nurse that must have been new because while she was doing it she said she thinks something was wrong.Not the best thing to say to someone who passes out.Dr. Khorrami also kept trying to force me to go to his wife as my OBGYN.He asked me 4 times in one visit and then 2 more times in my follow up.Im pretty sure its illegal to refer a Dr. to someone that will financially benefit you.I told him I have a OBGYN who I love and yet he kept trying to get me to go to his wife.He then kept saying how he is going to be my Internist and that I will come to his office for everything, which I will never be doing.When I came to my follow up appointment he said there were two more tests we could do.I told him I didnt want to do them. He said I probably didnt need them but just in case he would write me a prescription for the tests.I told him its not necessary and I didnt need it but he insisted.I left with no answers, and then 2 days later I get a message from a hospital about scheduling my test.I told him no so many times, and he doesnt listen, 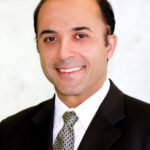