This is an archive of a consumer complaint published against Dr. Robby Ayoub at DirtyScam.com-

I honestly have nothing positive to say about Dr. Robby Ayoub and his practice.My mother first started seeing him and he seemed like a good doctor.My mother suggested that I start seeing him since Ive had lung problems since birth.He had me do a pulmonary function test with just being off my medication for one day.Because I am a stickler for taking my meds properly, missing a day of meds wouldnt throw off my body entirely, and the results were on the lower end of normal.Because of that, he does not believe that there is anything wrong with me.I told him that I didnt think the results were accurate because I need at least a week for my body to be rid of the medication in my system, so he ordered an in home sleep study.I didnt think that test would prove anything since nothing showed up on the PFT.It turns out that I have “mild apnea, but to no shock, I had figured as much given that I know my history.He then makes a comment about my weight, which I am more than aware of.He proceeds to state that all of my issues have to do with the fact that Im overweight.I told him that even when I was thin and within a healthy weight bracket I still had severe lung problems.He refused to listen and ignore what I said because he believes that the problem is weight, not my lungs.He then wants to order two other tests which I dont think will be fruitful because Ive had similar tests done a few years ago.He even tells me that I need to eat better, which I am already eating healthy food and in proper portions, but then suggests that I should take diet pills and eat foods that I am allergic to (which I am constantly telling him that those foods can kill me and thats why I have an epipen).He then mentions exercise, but if Im having trouble breathing, how does he expect me to exercise? And its even worse with my mother!He originally diagnosed her with pulmonary arterial hypertension only to have some tests done and then say shes perfectly fine to then say that she has COPD and then change his mind and say emphysema all within five minutes.He then says that COPD and emphysema is the same disease, but then says she has PAH? The lack of respect and the fact that he wont listen to his patients or give proper information on diagnoses is very appealing, and I dont understand how he is still practicing or considered a professional. 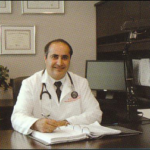