This is an archive of a consumer complaint published against Dr. Robert Epstein at DirtyScam.com-

I should have headed the warnings about Dr. Robert Epstein. I have no idea why so many people like him.When someone wrote he needs to retire I thought it was an attitude problem, but no this guy is like 90 years old with one foot in the grave.He cannot barely walk or hold a steady hand, let alone practice medicine or be a respectful person. Im pretty sure hes senile.I was looking for a new doctor because I had issues with my doctor ignoring serious illness and me ending up in the hospital twice and downright traumatized.I went to him to get my medication Ive used to treat my pain which I do not take everyday but have as needed for 20 years and hopefully get counseling for trying to conceive and overall womens health.This man was so rude to me, he was nearly shouting that I lseem like a drug addict and that all he does is give out birth control only and arrange for women to have abortions.He didnt even ask my family history whom also had the same issues.I was so offended and appalled, he was talking to me like I was crazy for wanting a baby, like trying to force an abortion on me eventhough Im not pregnant.He inquired about what had occurred to my health the last year, which are significant concerns and he waved his hand in my face to shut me up.This guy is a horrible piece of s***. I hope someone files malpractice on him. 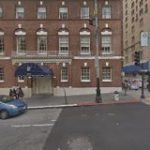