This is an archive of a consumer complaint published against Dr. Robert Rehnke at DirtyScam.com-

My aunt and I went to consult Dr. Robert Rehnke for a face lift surgery of my aunt. My aunt is 43 years old and is in a very good shape. However, she was not happy with the changes in her face and wanted to go through the surgery.Before reaching out to dr. Robert D Rehnke, we did all the research to ensure that we are approaching the right care.To my surprise now, I do not understand how people have talked so good about this doctor. Our experience was close to hell. Not just us, other patients whom we met after the surgery who were under after care facilities had the same issues. They were not satisfied with what the doctor did to them. I believe that the reviews are all fake. There is no way you cannot find a single bad review unless the doctor has paid to get them deleted.In our case, the doctor assured about everything before the surgery and told us what the effects would be. At first, we though of consulting some more with others before going for the procedure, however, dr. Robert confirmed that it would change the entire look of my aunt. She was pretty excited after meeting with him.Later, he proposed a date not so far from the surgery. We were given few tests list. My aunt did everything as asked. After a week, the surgery was scheduled. We had booked the appointment prior and had paid some amount as well. A day before the surgery, the receptionist called and rescheduled the surgery after three days.We accepted the change. The surgery was done on the date rescheduled. Right after the procedure, we both were shocked to see the results. The eyes were at different angles as well as the lids did not close properly.We tried to talk him into the same. However, he only said that the surgery needs times to set. He asked us to wait a little longer until the results are clear. We did the same. My aunt waited for more than three months. We tried fixing appointments with him but he said that it was not required. While the time passed, we kept calling him until he said that the eyes are tricky.If that was the case, why in the first place he even tried the surgery. He told he will not do anything for the same. We had to consult the other surgeon and he did the corrective surgery. Not only the surgery was cheap than the amount dr. Robert asked for, the surgery was completed with full satisfaction. The eye lids now are closing properly. The angle is still different for both the eyes which we would tackle later.However, we are never going to consult this doctor ever who ruined the entire case. The last surgeon was very nice and we would be going with him for further corrective surgeries. Do not trust the good things said about dr. Robert on the internet. These are just illusions. 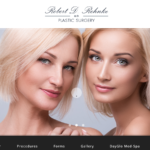