This is an archive of a consumer complaint published against Dr. Saigal Harsh at DirtyScam.com-

I never really had any issues with Dr. Saigal Harsh. Wasnt a huge fan of his office staff but he was always really fast and nice to my daughter.Today was a completely different story. My daughter went in for an annual check up and at the end of the visit I tried addressing her speech issues.His tone immediately changed and he started asking me why I waited so long to address the issue and why was this a concern “all of a sudden.As soon as I started to speak he cut me off and told me a check up was only for a physical and I would have to make another appointment to talk about my daughters speech problems.He also stated that he wasnt going to sit there and go over this issue for an entire thirty minutes when he had other patients to see.I was appalled at his response. Worst BEDSIDE manner ever! I am a very understanding person and if he would have just told me to make an appointment for that particular issue and left it at that then I would have done so!I left the office questioning my abilities as a mother. Then shortly after I came to the realization that the only person in the wrong was him.And on top of that I always wait an hour or so when I go in for a appointment and all of the toys in the waiting room are filthy!One medical assistant is really sweet but other than that the staff is very rude!!! I am currently looking for another doctor for my daughter . 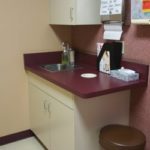