This is an archive of a consumer complaint published against Dr. Samuel Kao at DirtyScam.com-

I was very disappointed with Dr. Samuel Kao. He got my diagnosis wrong — which prolonged my recovery by a minimum of two weeks — and his office staff tried to overcharge me.I sustained injuries in a bike crash about a month ago.I hurt my elbow and my hand and thought I may have fractured something.I finally got an appointment with Dr Kao a week after the event.I chose Dr Kao because he accepted my insurance (Cigna), he was close to my work, he had an Xray machine in-house, and because of his one positive review.My first two interactions with his office staff were a bit rocky.The woman I spoke with did not speak great English (it was obviously her second language).However, I thought we had reached common ground — that my insurance would fully cover the Xrays (like many people, I was burnt once before when I was billed for a procedure that I thought insurance would cover).When I came in, I again sought to reaffirm this fact with their office.This time, it was clear that they wanted me to pay upfront for the deductible I had (in addition to my copay). I was pretty certain they were wrong.During this discussion, the doctor made his way out and addressed me (without looking at me in the eye).He basically likened this event to online dating — and how if you dont get a good feeling right away then maybe its not a good fit.He was telling me to go away. I wasnt budging, I wanted an X-ray.I called my insurance and they reaffirmed that the X-rays would be FULLY covered.I tried to give the phone to the office staff and they initially resisted (why?) before taking the phone and having the misunderstanding cleared up.So basically, the Dr stood up for his office staff despite the fact that they were wrong.OK fine, Im over it. I think he was too  when I saw him he joked, “So I guess now were dating.I met with him and he was clearly smart, knowledgeable and easy to talk to.He also bikes, so he understood my situation.He ruled out a fracture and dissuaded me from Xrays, in his words, they wouldnt show anything. (This despite the fact that I had already found that insurance would cover them in full, and that was the point of my initial visit).Two days later, when the swelling subsided even more, I felt something — a foreign object — in my hand.So his decision to forgo X-rays was a bad one. I had to scramble to get an appointment for an Xray (earliest appointment being the next week), which confirmed that something was indeed beneath my skin.I talked to the Dr a week after we met (and before the Xrays) to tell him the update.He was surprised. One would think that hed try to accommodate me in his schedule, having got the original diagnosis incorrect.I asked about scheduling a visit after Thanksgiving, and he told me that Id have to work something out with his office staff.Of course, they were not very accommodating, and offered an appointment two weeks out (a month after my initial fall).Ive now found Dr Chang in the Castro who is treating me in a timely fashion. 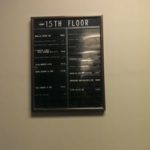