This is an archive of a consumer complaint published against Dr. Schrader Michael at DirtyScam.com-

Called Dr. Schrader Michaels office and no one gives their name, just “Doctors office.In August I made an initial appointment which would have to be in January at the earliest.I made a $30 appearance deposit to make sure I would show up.I canceled at the end of December, but was told the $30 was non refundable.That was not how I remembered it and after complaining and threatening, I was eventually called back saying that the Doctor agreed to my refund and that I should call Mildred on Monday for my refund.It took days to get through to her (she never called me back), and after 15 minutes of hold and her searching, etc.She found the transaction and said she would mail me a check.The staff is obviously for multiple Doctors and for the most part have little sense of customer service and are responsible to no one but themselves.I wonder how many others did not go through all the trouble that I did to get their $30 back.Another example of a Doctor having little sense of business ethics or that $30 is meaningful to some people.If he changes is policy to automatic and easy refunds, I will update this review. 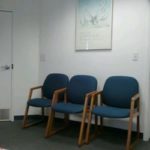