This is an archive of a consumer complaint published against Dr. Semkiw Leo at DirtyScam.com-

Dr. Semkiw Leo did an arthroscopy surgery on my knee. He is probably a good surgeon. However, I would not recommend him to anyone because of the following.Since the surgery, I have switched doctors because I lost confidence in him and I deeply regret agreeing to the procedure.1. Based on expert opinion, I am not convinced my surgery had high probability of resolving my issue at all.2. Dr Semkiw either did not know or at least did not warn me of possible negative outcomes of the procedure, other than possible infection.3. Setting expectations to what is to happen after surgery, before the operation, as well as explaining to me the reasons for the knees state, few weeks after, was unrealistic (runner returned to running days after surgery), non existent (why is my knee still swollen?) or seriously lacking, day and night compared with my current physician.4. Dr Semkiw told me there are “no restrictions on physical activities few days after surgery and “no pain no gain few weeks after that.This is in complete contradiction to what my current doctor is saying and, in fact, some activity might actually cause lasting damage.5. Dr Semkiw gave me pills which I suspected to have side effect of sleeping problems.I asked him about it and he said they will not. This was in contradiction to what the pharmacist told me. 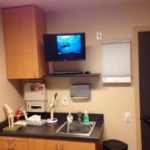