This is an archive of a consumer complaint published against Dr. Terrill Harrington at DirtyScam.com-

I would like to start off with the fact that I have never actually meet or was treated by Dr. Terrill Harrington.That is because Ive never been able to make it past his exceptionally rude receptionist.I first tried to go to his office in 2014 because my youngest son (3 at the time) wasnt feeling well.At the time my husbands work had renewed there insurance and our old cards had expired and we had not received our new ones yet.I told the receptionist that I had an email from the insurance company with all the new information on it as well as my old cards.She promptly got up from her desk and practically pushed me and my two sons out the door while saying if we didnt have insurance, which we did, we couldnt be seen and then proceeded to close the door behind us and lock it!I decided to try again in 2015 and called to make an appointment for both my sons and my husband.She once again asked about insurance where I told her all the information that was needed.She said that our insurance would not work there so we couldnt be seen.I said that I could pay for the appointments out of pocket and get reimbursed from the insurance company.She said again, in a more rude tone, that if we didnt have insurance (once again we did) that we couldnt be seen and hung up.Needless to say if you have insurance and want to see a doctor, dont call this office because the receptionist does not want to do her job or help anyone with a medical problem. 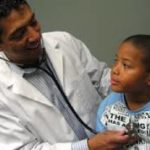